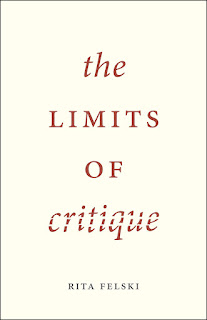 Summary of Chapter 3: An Inspector Calls

In this chapter Felski explores the connections between the practice of critique in literary studies, and the detective novel. Both have certain continuities, such as the presumption of some crime or mystery to be solved, and a particularly insightful character who solves this crime or mystery. She does not focus, again, on the sociological context (which would have been more interesting imho) in part because she wants to highlight the rhetorical aspects of this connection. For instance, she points out that literary studies, like novels, have plots or “plotting” and that suspicious readings are one of these typical, and culturally recognizable and invocable, plots: one of the central stories or familiar narratives by which authors and readers are prepared to organize the books they encounter, and understand their relation to the world. One of her key charges is that suspicious readings, like detective novels, blend interpretation with moral judgment, and thus take a normative, judgmental position on the “crimes” they are solving or revealing.

She points out that both detective novels and literary critiques have a double plot: one involving a criminal and a crime, the other involving a detective who solves the crime. In the detective novel the criminal is revealed to be a particular person, the crime is individualized; in critique, on the other hand, the culprit is “a text, genre, or linguistic structure” rather than a particular writer; however, Felski argues that these “nonhuman forces” are “personified” because they are imputed “intentions, needs, or desires” (94). It is not clear to me why imputing causality or even agency to a “nonhuman force” should be the same as “personification;” Felski insists on this because the next step is the assignment of guilt to the personified force. Both this move of personification, and the linked one of moralizing judgment, may well have plenty of exemplars (she cites several), yet it seems more than a bit forced to insist that these are qualities of every kind of critical reading. Then again, she is taking a somewhat polemical approach: she is using categorical language here, but later on will qualify this and bring more nuance into her account.

This is also the first of several points in the chapter where I wondered when she will call herself out for the obvious ironies of her position: she is herself investigating the crime of suspicious reading, identifying a non-human “critique” as guilty party, and assignment the blame of the crime of moralizing judgment. Assuredly, she must be fully aware of this irony, and also that readers will be aware. In fact, not until late in this chapter does she give any recognition of this, acknowledging her own attempt at “a nimble two-step without tripping over my own feet, both agreeing and disagreeing with my fellow critics of suspicious reading” (113). My only thought is that she is refraining, intentionally – perhaps, in order to distance her own authorial position from that of some of the critics she is critiquing – specifically, the postmodern, Foucauldian ones she will get to later in the chapter – who would take the position of delighting in such irony. Felski perhaps wants to avoid this, by now, somewhat cliché stance, and could also be intentionally not making the jujitsu power move, of calling oneself out in order to forestall the reader’s ability to do so. There has been no clear indication of this, but could one of the aspects of a postcritical critic, as we are told we will find in the final chapter, be this sort of non-parrying exposure, intentionally leaving insights and authority to the reader instead of claiming or attempting to corral as much as possible for the author?

Some aspects of the practice of critique she is critiquing:

The critic thus assembles a line of argument that correlates textual clues to larger social conditions that the work is anxious to paper over. (96).

(Felski incidentally is innocent of this by default, because her approach is rhetorical rather than sociological). Despite their claims that they are uncovering what is hidden, Felski insists that “the critic does not uncover guilt so much as generate it out of the axioms of her own interpretative practice.” Again, this is a surprisingly simplistic insistence on the reality vs. irreality of that which is “uncovered” vs. “generated” by critique, and also notably an insistence that these must be exclusive of one another.

She turns to the topic of “metasuspicion,” aka post-structural critiques of suspicious reading. Here, “suspicion is not eliminated or eradicated but ratcheted up a few more notches and applied with fresh zeal to a fresh target” (105), even “scrutinizing its own motives in a self-reflexive loop of spiralling distrust” (106). This is the practice she calls the “critique of critique” and which she herself intends to avoid:

The more vigorously critique is interrogated, after all, the more we seem to reinforce the very style of thinking we are trying to avoid. (107)

It seems a bit ironic, given that she lists “Foucauldian critics” among her main targets here, that her criticism at this point to be is essentially that of the “blackmail of the enlightenment.” She also, at least at this point, is not addressing the disabling aspects of such critique – neither, on the one hand, the strategically political disabling of dominant narratives that Foucault discussed as one of his motives; nor, on the other hand, the power move such critiques can make to choke off or render less practicable some particular practice of critique (e.g., the Freudian methods she mentions these critics as targetting).

Having set up this encounter with “Foucauldian critics” and the critique of critique, which she promises will come in the next chapter, she then shifts tone and starts discussing the positive, attractive and pleasurable aspects, even the enchantment, of the “art of critique.” [This bears a superficial resemblance to D&G’s practice, in A Thousand Plateaus, of setting up dichotomies in the first half of a chapter, then dissolving these dichotomies later, in an attempt to get past the concept of dichotomy; however, Felski’s acknowledgments of nuance are temporary, and Bakhtin might say, orchestrating; they are a momentary diversion from her polemical stance, which returns at the end.] Critique can provide a “jolt in perspective” (109) and can take the form of “addictive play” (110); she even notes the positive impacts that critical readings can have (115). Here is where she acknowledges her “nimble two step” of trying to both agree and disagree with the critics of critique, as she states that “critique is not a capital crime” (it is not in itself bad) but “only a misdemeanor” (in other words, it is still to be avoided). She reiterates her charges that suspicious readings involve personification and moral judgment; more tellingly, imho, she charges it with having become predictable (114) and even banal (115-6): “it no longer tells us what we do not know; it singularly fails to surprise” (116). This observation immediately strikes me as dependent on the sociological and political context of critique (which she has excluded from consideration; it also seems to distinguish her ultimately playful and opening-up (though along the way moralizing) critique of critique, from Latour’s more closing-off critique; perhaps because the stakes and context of discourse (who argues or takes what positions against whom, and to what ends) are very different in their respective fields.