Discourse in the Novel, Part 3 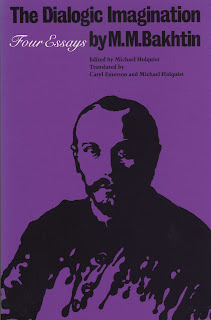 Summary of Part 3: Heteroglossia in the Novel

This section is devoted to the “compositional forms for appropriating and organizing heteroglossia in the novel” (301), which Bakhtin lists as “comic playing with languages, a story ‘not from the author’ (but from a narrator, posited author, or character), character speech, character zones, and lastly various introductory or framing genres” (323). Beginning with the comic novel, he discusses the ways in which the speech of different social strata, etc. are incorporated via parodic stylization in which a gap is maintained between the author’s voice and a “common view” or common voice, which is presented parodically, or as a means to refract the author’s view. The distance between the author’s view and the common view is not static, but “oscillates” in a manner that allows for refraction, ventriloquation, and direct authorial discourse, in turn.

Numerous devices for blending or managing the amount of heteroglossia in a statement are described. The speech of another may be concealed in the author’s speech through avoidance of the formal markers (e.g., quotation marks, etc.) normally used in direct quotation to clearly demarcate between the author’s and another’s voices. This is an example of a hybrid construction, which Bakhtin defines as “an utterance that belongs, by its grammatical (syntactic) and compositional markers, to a single speaker, but that actually contains mixed within it two utterances, two speech manners, two styles, two ‘languages,’ two semantic and axiological belief systems” (304). Bakhtin kindly does something he does not always do, which is provide a number of clear examples of what he is talking about, from Dickens. Some of the limits and possibilities of parodic comic style is discussed in relation to authors like Rabelais, Cervantes, and others in the comic genre.

Bakhtin notes two features of heteroglossia in the comic novel: first, heteroglossia is incorporated in the form of other styles, and other voices; second, parodic stylization is used to undermine these other voices and styles, and even to undermine the concept of seriousness or truth itself. There is a link here to the concept of critique, in both its secondariness (needing something to react against), and its connection to a critical awareness resulting from some kind of break with the everyday or expected: in the case of the novel, heteroglossia is an essential component, and this is even more true for the comic novel; the author’s ability to “oscillate” between forms and positions relative to “seriousness” or the “common view” demonstrates their independence in relation to language [a la Humpty Dumpty], which is connected to their awareness of the materiality of language (324) and to their awareness of the arbitrariness of the multiple forms by which language is stratified (as per the code-switching peasant in the previous section), [and therefore also of the arbitrariness and contestability of all social order]. The institution of a “posited author” or narrator, or character telling a story within a story (e.g., Chaucer, etc.), as described as a technique for establishing and putting to use this independence.

The interesting concept of character zones is introduced, in part as an explanation of some of the earlier hybrid constructions. These are “zones” in which the perspective or voice of the character bleeds out, as it were, influencing the author’s voice or diction, beyond the bounds of their formally circumscribed voice in direct or indirect quotation. The author, again, oscillates, using a diversity of direct speech, indirect speech, and “quasi-direct speech.” Bakhtin turns to the subject of incorporated genres, which he also discusses at greater length (as “inserted genres”) in the Dostoevsky book.

Having summarized the different means for incorporating and organizing heteroglossia in the novel, Bakhtin provides some useful definitions and discussion of heteroglossia and double-voiced discourse, and re-emphasizes the difference between such true double-voicing and the use of ambiguous language in poetry. He uses an interesting metaphor, in describing double-voiced language as containing a dialogue “as yet unfolded” (324) [which I at first took in the opposite, as in “as yet to be unfolded” – the dialogue in the heteroglossic word being not yet unpacked or drawn out into a real dialogue, but only being in potential, folded up and waiting. However, he is apparently saying the opposite, that a dialogue is a process of folding, perhaps of creating new relationships or oppositions, etc. – Deleuze of course would have to be folded into this. But Bakhtin only mentions this metaphor in passing, and does not develop it.]

He distinguishes between individual and social heteroglossia (the latter is more important), and discusses the importance of the unfinishedness, and openness, of language, which is relevant to his concept of the novel as a form which marks and makes more full use of this openness, instead of fighting against it, as he argues poetry does (326). He describes poor novelists as “unable to attain the heights of a relativized, Galilean linguistic consciousness” (327) which makes clear the stakes he sees here: the novel allows for a Galilean relativistic consciousness of language. That is, revolutionary and world-transforming, tradition-shattering, like the perspective of Galileo. He notes that all writing goes through this encounter with the voice and words of others, that is with a heteroglot, dialogicized world – but that poetry (for example), in its attempt to produce at the end of this process a pure, unitary form, clears away all the “slag of the creative process … as scaffolding is cleared away once construction is finished” (331). Prose, in contrast, leaves in and delights in this mess, as part of its

deliberate feeling for the historical and social concreteness of living discourse, as well as its relativity, a feeling for its participation in historical becoming and a social struggle; it deals with a discourse that is still warm from that struggle and hostility, as yet unresolved and still fraught with hostile intentions and accents... (331)

Prose does subordinate this discourse to the unity of its style, but this is a “dynamic unity.”