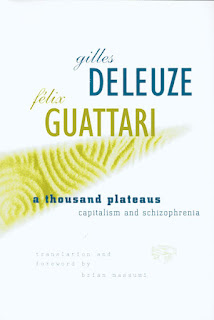 D&G use the story of the Wolf-Man, one of Freud’s famous patients, to articulate the concept of multiplicity. The Wolf-Man, embodying multiplicity, told a story of a dream with a shifting number of wolves; Freud, representing the arborescent method, reduces this to a single wolf representing the father and the overall reductive psychoanalytical approach that can reduce everything to a variation on one story. They bring in their terminology of “molar” (acting as a mass or a whole: being) vs. “molecular” (acting as a particle or particles: becoming), distinguishing “molecular multiplicities” from “molar unities.” Just as with the previous chapter, they hold these concepts apart for a while first, emphasizing their differences, before overthrowing this “dualist opposition” to show how the two are complicatedly interrelated and dependent on each other in the real world.

They talk about the “global comparison” made by “hysterics or obsessives” according to Freud, who are “capable of making a global comparison between a sock and a vagina, a scar and a castration, etc.” 27). The molar or neurotic approach is to see the sock as a vagina, while the psychotic sees all the stitches as a field of vaginas, or goosebumps as fields of tiny rhinoceros horns/phalluses, etc. [cf. Bakhtin’s “grotesque”]. Insofar as this applies both to the people Freud is treating, and to Freud’s method itself, it makes for an interesting development on Freud’s method as a “hermeneutics of suspicion,” as this was discussed by Felski in the second chapter of The Limits of Critique. In my notes on that I felt that there was an opening up of suspicion, followed by a pulling back and cutting off of suspicion (in other words a choice of allowing a certain amount but not too much, in order to create a productive discourse or method of analysis at a pragmatic point along the continuum from less to more suspicion), seen in each of the forms of critique Felski was criticizing, and also in her own critique of critique. Here in this chapter we see Freud’s method as just such a pulling back from too much suspicion or “global comparison,” while Deleuze and Guattari undermine Freud’s molar response by pushing further, towards the molecular multiplicity.

A discussion of “words” and “things” can’t help being a reference to Foucault, although it is Freud who is discussed. Freud dismisses the psychotic as seeing only (extensive) words instead of (intensive) things; the (extensive) relationship between the different holes, etc. here is false according to the molar insistence on intensive wholes [if they had been writing in English, they would surely have made the “w/hole” play on words]. This is actually a move to [misrecognize] the psychotics as also thinking in a molar way: “Thus, when there is no unity in the thing, there is at least unity and identity in the word” (27) which psychotics are mistaking for the thing. According to D&G, it is actually Freud who is here invoking the “devious despotic agency” of “the Signifier” (28).

The image of “becoming-wolf” is used to describe how being in multiplicity is, well, multiple: you are never a wolf by yourself, but a wolf as part of a pack:

...you can’t be one wolf, you’re always eight or nine, six or seven. Not six or seven wolves all by yourself all at once, but one wolf among others, with five or six others. (29)

Similarly the unconscious is “fundamentally a crowd.” The Body without Organs (BwO) is the sort of background on which these molecular multiplicities (crowds, organs, wolves) form and dissolve (in other words it is does not become a “mass,” does not reduce these to parts in a molar whole). The concept of “relative indivisibility” is discussed re these wolves etc. which form the pack: they are “ceaselessly transformed, and cannot be divided or transformed without their elements changing in nature each time” (31).

They explain that their “substantive” of multiplicities was “created precisely in order to escape the abstract opposition between the multiple and the one, to escape dialectics...” (32). They discuss various precursors who distinguished between multiple kinds of multiplicities: Riemann, Meinong, Russell, Bergson, and Canetti. From this they derive the distinction between the [anarchic, molecular] pack and the [molar, unifying] mass (33). Hierarchy and equality exist in both, but hierarchy is less stable in packs, and while packs are “constituted by a line of flight or deterritorialization,” masses “only integrate these lines in order to segment them, obstruct them, ascribe them a negative sign” (33) [my italics in both of those quotes, to emphasize the verbs. It is interesting that the mass here is only described as destroying or obstructing the line of flight, instead of feeding off it or using it in some productive manner, e.g. exploiting it].

From page 34, they turn to disabling the dualism of “molecular machines” versus “molar machines” because a dualism would of course be arborescent and molar:

How could lines of deterritorialization be assignable outside of circuits of territoriality? Where else but in wide expanses, and in major upheavals in these expanses, could a tiny rivulet of new intensity suddenly start to flow? (34)

They apply their complex reading of multiplicities in several contexts, first in an evocative description of love, and then in a discussion of statements which is very reminiscent of Deleuze’s later book on Foucault: “There are no individual statements, only statement-producing machinic assemblages” (36). An individual person is not just a member of groups but has groups inside them [i.e., they are not a fundamental unit of the assemblage, but a point of [figuration] along the way from the molecular to the molar]:

A page on they describe these statement-producing assemblages as “collective agents of enunciation” which must be understood not as “peoples or societies but multipliticies” (37). One key takeaway is their attempt to overcome the opposition between the “social” and the “individual” (an aspect of statist, molar thinking), with this concept of the pack in which everyone is inherently both social and individual. In their discussion of Kafka’s story “Jackals and Arabs,” they approve of the jackals’ desire for “cleanliness” which (in a parenthesis by Massumi?) is identified as propreté in French, meaning also, ownness.