The Paris of the Second Empire in Baudelaire, Part 1 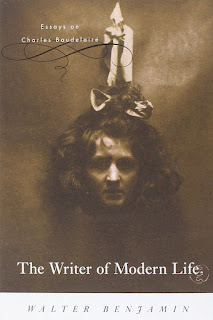 Summary of Part 1: The Bohème

This section focuses on the complicated class status of Baudelaire as a bohemian, and how this results in a complex and somewhat ambiguous consciousness. Benjamin emphasizes, from Marx, the figure of the "professional conspirator" as a member of the bohemians, and this person's ambivalent role in relation to more authentic revolutionaries from the working class. Various pre-Marxist trends in insurrections and conspiracies are explained away, including Blanqui. The direction this is presumably going in is a recognition of Baudelaire's particular view of the city and the economy, etc. (his "cognitive mapping" in Jameson's terms), and its failings and limitations; however, his particular and unique insight will be emphasized later. Baudelaire uses ambivalent and unsettling imagery, such as the invocation of Satanism, and the image of the proletarians as children of Cain. In the background of this discussion of Baudelaire and some of his contemporaries, lies the changing price and fate of the newspaper, as these grow in popularity after a decline in prices, which is itself brought about through advertising and serial novels, etc. in the fuilleton – which in turn affects everyday life through the spread of ideas, art, etc. This shapes the status of Baudelaire and others like him as sellers of themselves, or of their own thought, in the market that has been created here [and presumably this would make him capable of understanding how fine art was being transformed in similar ways, at the same time?]