Or, The Worst Cabdriver in San Francisco (Again)


(Read Part Twelve: "It is Legal to Shoot Mike Brannigan")

On February 2nd, 1868, two young women stepped off the steamer Montana onto the Pacific Mail dock in San Francisco. Mary Keating and Kate O’Rourke, ages sixteen and seventeen, were “respectable young Irish girls” from Boston, who had made the voyage west in hopes of finding “an honest living at a more remunerative employment than the older cities afforded.” On the waterfront they hired a hack to take them to an uncle’s home on Dora street (Now Langton), out near Eighth. The driver of the hack was a friendly, charming man named Mike Brannigan.

As Mike drove the carriage away from the waterfront and through the city streets, he may have pondered on the changes that had come over the city in the years since the early 50s, when he had been one of the first hackdrivers around, as well as a thug and a “shoulder-striker” for the Democratic party machine. Back then, much of what was now the South of Market had been a maze of sand dunes and marshes. Mission had been the only street that stretched west to any extent; and even it was interrupted by a bog (near today’s Seventh street) which had repeatedly swallowed the bridges built to cross it. Now the sand dunes were levelled and the bogs drained; a neighborhood spread out to the south and west, right out to the Mission, which had once stood at a good distance from the city. Streetcars, powered by horses or by steam, criss-crossed the growing city with a transportation network that would have seemed impossible a decade earlier.

Mike didn’t know it as he drove through those South of Market streets, but his greatest victim, Edith Mitchell, had died of cholera only a month before, halfway around the world in Bombay.

The girls’ uncle was a poor man, a “picker of rags and gatherer of bottles,” and when they arrived at the house on Dora—by all accounts a dilapidated hovel—Brannigan professed to be shocked. “This is a mean looking, dirty place for you to live in,” he told the girls. “Why don’t I come here to-morrow with a lady who will take you to a better place than this?” The girls were suspicious, and refused his offer.

But Mike did come back. He sensed that there was money to be made here.

Once again, Mike had picked up a second job to supplement the hackdriving trade. After all, most San Franciscans—indeed, many Californians—knew all about Mike’s sordid history, and were not likely to patronize his hack, or even to associate with him in public. The only place he could find business was on the waterfront, picking up out-of-towners who had no idea who he was. That, or working the night crowd, connecting drunk passengers with their vices of choice. The latter was more Mike’s style.

Back in 1856 when he had been exiled from the city by the Committee of Vigilance, the prostitutes of San Francisco had given Mike a going-away present of clothes and cash. Now he was back in league with the ladies of the night. For a kickback, he directed amorous passengers to the right locations. He assisted powerful madames in the shuffling of prostitutes from one city to another, even daring to venture back to Virginia City in the process. And he helped procure new flesh for the bordellos. It was in this role that Mike drove his carriage up to 505 Dupont street (now Grant), near Pine, to talk to Harriet Skillman, owner of a “house of assignation” at that address. Skillman had agreed to pay Mike $8 for leads on attractive young girls who could be lured into a life of prostitution.

All she had to do was lure the girls into her home. By the standards of the day, once a woman had spent any length of time in such a place, she was considered “fallen,” and could hope for no other prospects. It was the modus operandi of predators like Skillman (and Brannigan) to use this ideological trap to literally trap young girls in

the life of infamy and hopeless degradation from which there is no escape when once poor deluded victims fall into the hands of the procuress.

As promised, Mike returned to Dora street the next day with Mrs. Skillman in his carriage. She told Mary and Kate she was looking for a young woman whom she had been expecting to arrive on the Montana; she further claimed that she “was struck with the resemblance of one of them to the missing girl.” She invited them to come and work for her at her home on Dupont street. The girls, smelling a rat, declined; but Mrs. Skillman would not desist. Repeatedly she returned to their door, with and without Brannigan, each time imploring them to come and visit her home.

The girls told all this to their uncle, who recognized Mrs. Skillman by reputation. The police were called in, and Detective Blitz was put on the case. Bernard S. Blitz, San Francisco’s first Hack Inspector, was under five feet tall, constantly active, a German-Jewish immigrant, a Mexican-American War veteran, a Forty-Niner, a drinking buddy of Mark Twain’s (according to one story), a teetotaller (according to another), and an absolute terror to all of San Francisco’s swindlers, thieves, and criminals during the 1860s. Twain wrote of him:

Blitz is a small man, but if there were eighteen more vacancies to fill in the police department, I think Blitz would come nearer filling the whole lot by himself and filling them well and doing justice to the position than any eighteen men in San Francisco.

With the dashing young Captain Hanna as his sidekick, Blitz hit upon a scheme to entrap the entrapper. He told the girls to accept Mrs. Skillman’s next offer, but to let him know; he and Hanna would follow them and catch Skillman in the act of enticing the girls into a house of disrepute.

The next afternoon, at 2 o’clock, Kate and Mary met Mrs. Skillman at a street-corner near their house, where they boarded a crowded streetcar. It was undoubtedly a horse-car of the Central Rail Road, which ran from South of Market, up through the Union Square area, and passed within a block of Skillman’s house at Dupont and Pine before heading down to the waterfront. A little after Skillman and the girls boarded the car, Blitz and Hanna slipped on, unseen.

On the ride, Skillman tried to charm the girls with talk of easy housecleaning work and trips to the Cliff House. Suddenly she caught a glimpse of Blitz and clammed up; but he allayed her suspicions by getting off the car. At Bush and Dupont, Skillman took the girls off the car and nervously shepherded them up the block, wary of being followed. They arrived at the steps of 505 Dupont, but

just as the door was opened and she supposed that she had the unsuspecting victims inextricably in her toils, the heavy hand of Capn. Hanna was laid on her shoulder, and she was taken to the Calaboose on the charge of conspiracy to reduce the girls to prostitution. (Daily Evening Herald, Stockton)

The girls were saved in the nick of time! Brannigan was arrested as well, on the same charge of conspiracy. It just goes to show: pimpin’ ain’t easy...

Skillman and Brannigan assembled a crack team of lawyers, including Col. James, who had helped Brannigan before, and ex-Judge Tyler. There were also rumors that Skillman—being, after all, a San Francisco madame—had plenty of dirt on “parties moving in the highest circles of society,” and would spill this dirt if she was convicted. The defense’s main strategy was the spreading of what we would now call “alternative facts,” producing witnesses to assert that Kate and Mary had already been prostitutes in Boston, were “addicted to intemperance and lewdness,” and had concocted the whole setup, intending to blackmail Skillman into a settlement. (And, just maybe, this was actually true).

There were trials, and then retrials. There were even all manner of side trials, of witnesses charged with perjury, of friends of the defense bribing witnesses; even Captain Hanna was accused of very improperly taking Kate O’Rourke out on a date. In the end, the defense succeeded in introducing doubt into the minds of the court. Skillman and Brannigan were convicted, but treated leniently; Skillman was fined $200, and Brannigan (who had spent some months in jail during the trial) was sentenced to time served, plus a fine of $60. The judge even went so far as to issue something unheard of: an apology (sort of) to Mike Brannigan!

Had some other man than Brannigan been tried for the offense, the verdict might have been different. … Still there is something surrounding certain men, a kind of magnetism, if it might be so called, which must influence jurors, and is not tangible. Doubtless the reputation of Brannigan—whether properly founded on bad conduct by him was not for the Court to determine—had an effect on the jury, and the fact was well known that at the time of the trial there was a strong prejudice against him in the community.

In other words, the Court recognizes that it’s hard out there for a pimp!

After paying his fine, Mike left San Francisco again. He appears to have spent some time in Sacramento, where he was arrested a few times for disturbing the peace. In 1870, he is mentioned in an article complaining about the presence of prostitutes at the State Fair:

The soiled doves have flocked to the city in large numbers this year, from all portions of the State, and are represented in force at the races, redolent of musk and paint, every day, in charge of such men as Mike Brannigan and his ilk.

After that he disappears for several years. Could Mike Brannigan's scandalous career be over at last?

In 1873, the Sacramento Daily Union found him:


The notorious Mike Brannigan, who was once convicted of rape in Sacramento, has turned up in Galveston, Texas, as a livery-stable keeper.

Next Time: The Worst Cabdriver in Galveston

Posted by Don Anderson at 12:14 PM No comments:

Yet Most I Love Your Scars 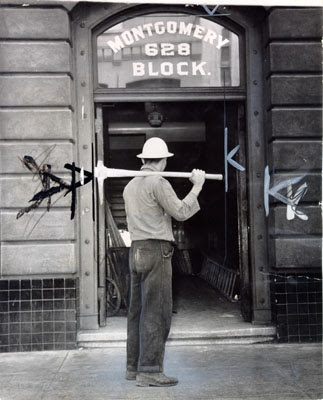 
I love the flowing sky-line of your hills,
Blue spaces that encircle you with dreams;
I love the rugged contour of your strength
That points the sky with pinnacles of steel;
Your jaunty men make confident with health,
Their care-free swagger and their careless jokes;
The laughing pretty girls upon your streets,
Keen-eyed and heedless of the dusty winds;
I love the stinging fog that gives them zest,
That wakes ambition in the blood and snaps
The sparkling thought from fact to prophecy;
I love your round wind-hammered hills of sand
When I can see the sun-gleam on remote
Tremendous weavings of the western main;
I love your tall gray buildings, garish-new;
Stark flat-faced monuments to Opulence:
Your naughty lights o’night, — your loud cafes;
The stream of strife and merriment that glows
With the blood of people unafraid to live;
But most of all I love your lingering scars:—
Occasional split curbs, — blank-ending steps, —
And grim chaotic gulfs of broken brick,
Where one fierce day the furnaces of Hell
Roared red with courage of a molten race
Remoulded amid shuddering Templors.
Out of those pits of pain now rise serene,—
Upbuilt of hope,— pure shafts of palaces,
White against azure, tipped with domes of Dream;
Yet most I love your scars, our battle ground
Of death and dust and triumph, you are Home!


Posted by Don Anderson at 1:49 PM No comments: