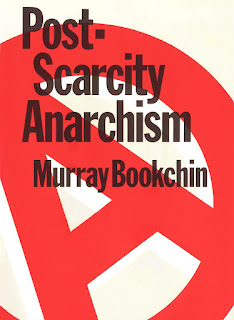 The three planks of Bookchin’s argument in this book are laid out in the first three chapters, in turn: 1) the specific revolutionary potential of the post-scarcity condition; 2) the link between ecology and anarchism; and 3) the possibilities for the development of technology in an anarchist, rather than a capitalist, social context. In this chapter Bookchin lays out the second plank, making the argument which can be summarized as “red and green make black,” (i.e., a socially egalitarian and ecologically sustainable society will necessarily be an anti-authoritarian one).

He begins by discussing the links between the development of science and of revolutionary thought: “In almost every period since the Renaissance the development of revolutionary thought has been heavily influenced by a branch of science, often in conjunction with a school of philosophy” (79). He discusses the historical influence of disciplines like astronomy, mechanics, mathematics, biology, and anthropology in delivering shocks to the consciousnesses of society, undermining the complacent ideologies of earlier times, and spurring idealistic and progressive movements. However:

In our own time, we have seen the assimilation of these once-liberatory sciences by the established social order. Indeed, we have begun to regard science itself as an instrument of control over the thought processes and physical being of man. This distrust of science and of the scientific method is not without justification. (79)

[There is here a direct link with Foucault’s discussion of the history of the critique of the Enlightenment, in “What is Critique?”]

What is perhaps equally important, modern science has lost its critical edge. Largely functional or instrumental in intent, the branches of science that once tore at the chains of man are now used to perpetuate and gild them.

[and here, also interesting in relation to Wiener's mid-century complaints about intellectuals of his time, in the context of the growing subordination of academia to capitalist interests and models.]

Even philosophy has yielded to instrumentalism and tends to be little more than a body of logical contrivances; it is the handmaiden of the computer rather than of the revolutionary. (79-80)

[I imagine a lot of people today would object to the characterization of “the computer” and “the revolutionary” as categorical opposites; however, the point Bookchin is making needs to be recognized. The importance of the rise of computing in the expansion of late 20th and early 21st century governmentality cannot be overstated. Hence, it is reasonable to suspect philosophy in the service of “the computer.”]

Despite the subservience of science to capitalism and the state during this "period of general scientific docility," one modern scientific discipline holds out hope, and that is ecology. Its implications are in fact "explosive" and revolutionary; it is on the one hand critical and on the other “integrative and reconstructive.” [Bookchin does not state this here, but this two-sidedness is an important aspect of critique as part of a unified praxis.] Ecology shows the limits of human mastery, over both nature and humanity. Bookchin explores the analogy of humans as parasites: humans have become insanely destructive, and this makes them similar to parasites; yet, according to Bookchin, parasites aren’t inherently destructive in this sense but only become so, due to some disruption in their environment. The question then is, what is the change that has happened in the human social environment, which has caused humans to become parasites? The answer is of course the growth of the state and of capitalism over the last few centuries.

He places part of the blame on "urbanized and centralized society":

If we put all moral considerations aside for the moment and examine the physical structure of this society, what must necessarily impress us is the incredible logistical problems it is obliged to solve—problems of transportation, of density, of supply (of raw materials, manufactured commodities and foodstuffs), of economic and political organization, of industrial location, and so forth. The burden this type of urbanized and centralized society places on any continental area is enormous. (84)

[cf here Merrifield's accusations of anti-urbanism; yet Bookchin’s complaints are technical and logistic. Couldn't the same kind of developments that produce "post-scarcity" also correct some of these problems of distribution? In other words, if the problem is no longer production but distribution, couldn't a large-scale society (economically, not necessarily politically centralized) find technological solutions?]

Bookchin returns to the question of the emergence of hierarchy, as the cause for human parasitism:

The notion that man must dominate nature emerges directly from the domination of man by man. (85)

It starts with the patriarchal family, and leads to the split between "mind and labor" and "spirit and reality," and the “anti-naturalist bias of Christianity;” this comes to a head during and after the Industrial Revolution when market relations replace "organic community relations" and nature becomes a "resource for exploitation." [This is what Marxists call the "metabolic rift."]

In  addition to the industrial order or production, Bookchin identifies another order or aspect of society, the "consumer society," in which a parallel process (though this time plundering the “human spirit” of desire, needs for identity and creativity, connection, etc.) takes place that exacerbates and drives the former plundering of nature:

Needs are tailored by the mass media to create a public demand for utterly useless commodities, each carefully engineered to deteriorate after a predetermined period of time. The plundering of the human spirit by the marketplace is paralleled by the plundering of the earth by capital. (85)

He points out that the contemporary discourse on overpopulation blames countries like India, when the real culprits are the over-producers like the US, wasteful in production  and pollution (waste meaning both excess, and the inefficiency/toxicity of the production process); also the need for economic growth means this will continue to get worse. In addition to literal waste and destruction, there is an argument about objectification and simplification that drives this and/or makes it possible:

From the standpoint of ecology, man is dangerously oversimpliflying his environment. The modern city represents a regressive encroachment of the synthetic on the natural, of the inorganic (concrete, metals, and glass) on the organic, of crude, elemental stimuli on variegated, wide-ranging ones. (87)

In discussing this simplification, he returns to his massification/urbanization argument, that large populations are difficult to manage, creating bureacratization, centralization, standardization, etc. This "mass concept of human relations" is “totalitarian, centralistic and regimented in orientation" (87).

[This is one of the aspects of Bookchin’s thinking on cities that Merrifield was criticizing. In Bookchin’s defense he is making an argument about a certain approach in modernism, which he elsewhere defines as “urbanization” and defines in contrast to the “city,” which in his terms is a true community on an idealized Athenian model. A problem with Bookchin here is that, in this rant against standardization, etc., he seems to be oversimplifying (ironically enough) and not taking into account the individualistic side of capitalism, which of course has become more pronounced over the later decades, in part as a response arguably to this very sort of critique of mass media and consumerism (which was recuperated into neo-liberalism as a means of asserting a distinction between capitalism and the state).]

Authoritarian thinkers (which includes liberals, Marxists, and conservatives) used to deride anarchists as idealists, but this has changed, due to the threat of ecological disaster, and the possibilities of the post-scarcity condition: “historical development has rendered virtually all objections to anarchist thought meaningless today” (91). He claims that the “intuitive anarchism” of the youth of his time, is a reaction against everything that is wrong with society today; ecological thinking [with its reconstructive praxis] can "convert this often nihilistic rejection of the status quo into an emphatic affirmation of life" (92).

The opposite of standardization/simplification (which is what has created the human-as-pest conditions) is "organic differentiation,” and this is something that is a central feature of both anarchist and ecological thinking. He discusses going back to the small-scale farming of the past, which resulted in the development of [traditional ecological knowledge]; we also need more diverse fuel sources, such as were used before the Industrial Revolution reduced everything to coal, then to coal and petroleum [and the argument here is an example of Bookchin escapes the binary rhetoric of past vs. future, with such a call for an integration of past practices with new technologies:]

We could try to re-establish earlier regional energy patterns, using a combined system of energy provided by wind, water and solar power. We would be aided by devices more sophisticated than any known in the past. (95)

Bookchin’s call for a “mosaic” of fuel sources parallels the ecological call for “organic diversity” and the anarchist call for self-directing individuals and communities. Bookchin does believe that urban decentralization will be necessary to use renewables, based on, for example, the solar and battery tech of his time; but this fits as well with his argument that small-scale, largely self-sufficient communities could be more locally environmentally conscious and responsive, and this in itself would lead to a healthy diversity of local approaches to social organization and morphology, each fitting their own environment.

Bookchin criticizes the use of engineering "gimmicks" to marginally reduce pollution in cars, etc. The real problem is scale and growth, which will overrun these incremental advances:

there is a strong sentiment to "engineer" the more noxious features of the automobile into oblivion. Our age characteristically tries to solve all its irrationalities with a gimmick--afterburners for toxic gasoline fumes, antibiotics for ill health, tranquilizers for psychic disturbances. (97)

For the rest of the chapter he basically reiterates his main points again, that both ecology and anarchism call for spontaneous diversity rather than the destructive simplification and homogenization which has been the product of the current state capitalist system. He quotes the anarchist Herbert Read that “Progress is measured by the degree of differentiation within a society” as individuals are given freedom to be themselves and find their own paths; according to Bookchin, this is a common approach of both anarchism and ecology: you don't control or micromanage a system, but allow diversity to form spontaneously. “Their object is not to rule a domain, but to release it” (100).

He repeats the call for decentralization: cities should be reduced in size in order to “create real communities;” the model is the Athenian ecclesia, a face-to-face democracy in which everyone has an opportunity to be involved and contribute.

Electronic devices such as telephones, telegraphs, radios and television receivers should be used as little as possible to mediate the relations between people. (101)

In a true, face to face democracy, political relations can become personal ones (an interesting revision of the term “the personal is political”):

all members of the community should have an opportunity to acquire in full the measure of anyone who addresses the assembly. They should be in a position to absorb his attitudes, study his expressions, and weigh his motives as well as his ideas in a direct personal encounter and through face-to-face discussion.

Members of these communities should not merely be limited to specialized trades but should experience a wide variety of trades, etc; the epitome of Marx's “hunt in the morning, criticize after dinner” ideal:

To separate the engineer from the soil, the thinker from the spade, and the farmer from the industrial plant promotes a degree of vocational overspecialization that leads to a dangerous measure of social control by specialists. (102)

[The above is roughly Bookchin's version of Braverman's thesis.] The anarchist society would form an "ecosystem" of small-scale, self-sufficient communities, with "moderate population size" centered on the local ecosystem, basically an "ecotopia" idea. Local communities will take different forms, in adaptation to their environmental circumstances:

an exciting, often dramatic, variety of communal forms—here marked by architectural and industrial adaptations to semi-arid ecosystems, there to grasslands, elsewhere by adaptation to forested areas. (103)

In a non-hierarchical society, differences will be valued and encouraged instead of subsumed under a hierarchical model of superior and inferior; individuals will be able to achieve their full potential (104).