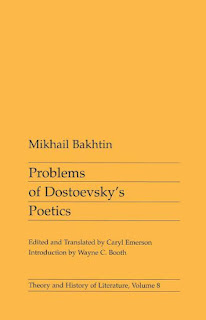 Summary of Chapter 2: The Hero, and the Position of the Author with Regard to the Hero, in Dostoevsky's Art

In this chapter Bakhtin lays out his theory of the polyphonic novel with regard to the relationship between the author and the hero. Essentially, they each have their own voice, and neither is superior; whereas in the monologic novel the author has a "surplus" of knowledge available, over and above all the characters, in the polyphonic novel the author has no surplus. [But I wonder what happens when the author/narrator is one of the characters? Despite the first-person Notes from Underground, Bakhtin dismisses first-person narration as a trick that does not really compromise the power of the author.] Dostoevsky depicts, not the reified image of a character (which would be monologic), but the self-consciousness of the character. (Although "chunks" of monologic style persist within the dialogic novel, this does not prevent the latter aspect from forming the most important part of it).

Characters also give voice to "double-voiced" speech (often imagining the words of others about themselves, and responding) in "microdialogues". This involves them enunciating potential statements that others could make, mostly about themselves – in other words, engaging in articulation, largely in relation to the process of interpellation. "Truth" also is shown to be relative to the speaker's subject position: the same statement voiced by a person within their own self-consciousness becomes a lie from the outside as a reification [this and related parts are strongly reminiscent of Volosinov]. The concepts of unfinaliizability (a character who is unfinishable, existing as more than the author or narrator can contain or represent), and dialogicity (statements existing in relation to other statements), are explored.