Society of the Spectacle, Chapter 5 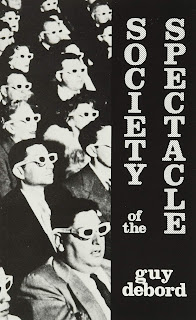 Debord here outlines his theory of history, or rather his dialectical account of the history of time, that is, on the relationships between cyclical and "irreversible" (aka linear) times. He follows a standard framework in which the earliest societies are seen as purely cyclical. He discusses time in early nomadic and sedentary societies.

Debord links the emergence of "the social appropriation of time" to the emergence of hierarchy (#128). Irreversible/linear lived time emerges as "temporal surplus value" which is enjoyed by the elites in their named adventures and conflicts (the subject matter of ancient chronicles and epics), while the masses remain anonymous in the cyclical time that reproduces society. Irreversible time is "squandered" [echoes of Bataille], like a luxury good, it is not put to use reproducing society (but maybe myth, or some kind of elite ideology). "History then passes before men as an alien factor, as that which they never wanted and against which they thought themselves protected." (128) If you’re a peasant, you don’t want history coming to your village.

He details the emergence of writing as a tool of the ancient state; chronicles and epics tell the individual stories of the elites at the surface, and give no regard to the depth of everyday cyclical time (132). Ancient Greece and the Mediterranean are given as a time of a break in which historical consciousness emerges for a wider elite; this brings the "menace of forgetting” (133) (this is presumably derived from Plato’s thoughts on the effect of writing). But with the middle ages comes the return to cyclical time, though damaged; a compromise is made with religion which becomes "semi-historical," a compromise between myth and history, to sustain myth. Debord discusses the middle ages, the figures of the pilgrim and of millenarian movements, and their relationship to modern day revolutionary movements. "The millenarians had to lose because they could not recognize the revolution as their own operation" (138) (i.e., they thought it was the will of God). The return of historical life begins in the Renaissance.

The bourgeoisie overthrow the old feudal order (140) and make irreversible time the time of labor (and labor time in factories) and of commodities (and their succession). Irreversible time is now democratized and becomes the engine of society, as opposed to cyclical time which decreases in power. This is the "time of things" (142). But there is also a move to reify history or declare the end of history, to prevent revolution and the thought of the possibility of revolution. A new compromise is made with Christianity. The globe is unified under the irreversible time of commodities.