Cunning Intelligence, Introduction and Chapters 1 and 2 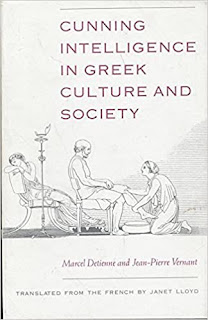 Summary of Introduction and Chapters 1 and 2

The authors explain their purpose in exploring a neglected field of study of ancient thought: the concept of metis or “cunning intelligence,” and how it was distinct from, and contrasted to, the philosophical discourse which was elaborated in ancient Greece. A few years earlier, in The Masters of Truth in Archaic Greece, Detienne had articulated his theory of how the development of a rational philosophical discourse on truth or aletheia was a challenge to, and replacement for, an earlier limitation of the claim to truth to kings and poets, through whom the gods were thought to be speaking. The ancient philosophical dismissal of metis was thus of an alternate image of intelligence which competed with that of the purely rational, itself still new and fragile at the time.

"...metis is a type of intelligence and of thought, a way of knowing; it implies a complex but very coherent body of mental attitudes and intellectual behaviour which combine flair, wisdom, forethought, subtlety of mind, deception, resourcefulness, vigilance, opportunism, various skills, and experience acquired over the years. It is applied to situations which are transient, shifting, disconcerting and ambiguous, situations which do not lend themselves to precise measurement, exact calculation or rigorous logic." (3-4)

For this reason, it was ignored or sleighted by the philosophers as an alternate form of intelligence to the logical form which they themselves sought to elaborate and establish the authority of. The authors note some differences between the positions of Plato and Aristotle on this, and also the sophists, as arguably a transitional form who overlap with both the position of the philosophers and that of traditional metis. Greek philosophy established or relied on an opposition between Being and Becoming; Metis had no place in this since it "operates by continuously oscillating between two opposite poles" (5)

Detienne and Vernant use the example of a chariot race from the Iliad (and some other references, particularly to the myth of the goddess Metis) to explore several aspects of the concept of metis. In the race, Antilochus, following his father Nestor’s advice, defeats Menelaus by tricking him into thinking Antilochus has lost control of his horses, and is about to swerve into him, so Meneleus pulls up; Antilochus then wins the race. Four aspects of metis are defined and discussed:

1. Metis is a counter to strength, distinct from it and able to beat strength (though it is also good to have both);

2. There is a time of metis, the time of the agon or struggle. It is about finding opportunity (kairos) within the contest. A discussion of the "lightness" and "heaviness" of thought (metis seems to be a balance of these two qualities) and relation to prometheia, foresight.

3. Metis is multiple and diverse, shimmering; a valuable discussion of its relation to mobility is given.

4. Metis is about illusion, deception, masks; it hides truth [or, though the ancient Greeks would not have gone here, it could undermine a faith in truth (I was just reading similar questions in a Fifth Estate article by Ben Olson re: the Residents and surrealism.]

Chapter 2: The Fox and the Octopus

From Homer in the previous chapter, the works of Oppian and Pseudo-Oppian (and a few others peripherally) are considered. Fish are discussed as an example of metis in nature; hunters and fishers have to be more crafty than their prey. The Fox and the Octopus are particular exemplars of metis. Many aspects of metis such as reversal, deception, tangledness, etc. are emphasized. Connections to labyrinth, mobility, and polytropos are discussed.

There is a comparison of the polytropic man with the ephemerosone, ephemeros man, so called by the Lyric poets: “He is a man of the moment, an man of change: now one thing,  now another; he shifts and slides from one extreme to the other” (40). Both are characterized by their mobility; however, ephemoros is a negative image, they are blown by the wind, not like the polytropic one, who maintains control: "The polutropos one, on the other hand, is distinguished by the control he possesses: supple and shifting as he is, he is always master of himself and is only unstable in appearance."  He traps his opponent through apparent changes. "He is not the plaything of movement but its master." He gives the appearance of the ephemeros to manipulate people. Plutarch is cited on Alcibiades as an example of a polytropic man

Metis is pragmatic and applied rather than abstract (in contrast with philosophy):

"It is an intelligence which, instead of contemplating unchanging essences, is directly involved  in the difficulties of practical life with all its risks, confronted with a world of hostile forces which are disturbing because they are always changing and ambiguous." (44)

The Sophist has some characteristics of metis:

"And again, it is in terms of hunting and fishing that he defines the art of the sophist who, in contrast to the philosopher whose wisdom is directed towards the world of ideas, embodies the scheming intelligence of the man of metis, plunged into the world of appearance and of Becoming. By means of his skill and rhetorical ploys, the sophist can make the weaker argument triumph over the stronger."  (45)