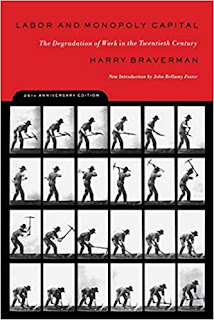 Summary of Chapter 6: The Habituation of the Worker to the Capitalist Mode of Production

Braverman turns to the general question of how the worker is acclimated or habituated to the capitalist mode of production, given that this mode of production is deeply "inhuman" and exploitative; and also that it is the result of a growing control over the labor process, taking away skills and control, as well as better pay, that workers had previously had. The short answer is that they are not: they are merely forced to comply because other options have been destroyed, but remain deeply resentful of the labor situation. A key distinction is also made between industrial engineers who design and develop the labor process for management, and industrial psychologists and sociologists who are supposedly supposed to get the workers to go along with this.

Braverman gives the history of industrial psychology, and later the human relations movement, which grew out of criticisms of the former (that it was deeply inaccurate and simplistic). He then dismisses both, because industrial engineers pay no attention to them. At best, they serve to provide an ideological dressing for the factory. He quotes some sociologists who talk about the "inconsistency" of the fact that the labor process is redesigned to make the individual worker less and less important, while they are repeatedly being told by HR etc that they are absolutely important: Braverman responds that:

But this is more than an "inconsistency," since job design represents reality while personnel administration represents only mythology. From the point of view of the corporation, there is no inconsistency, since the latter represents a manipulation to habituate the worker to the former. (100)

Nevertheless, if manipulation by sociology and psychology are of relatively little importance, and only secondary, the question remains:

If the adaptation of the worker to the capitalist mode of production owes little to the efforts of practical and ideological manipulators, how is it in fact accomplished? (100)

Braverman gives the example of the Fordist assembly line and worker response of walkouts and unionization attempts under the IWW. Ford is forced to respond by raising pay, and the overall industry responds with a graduated pay scale which appears to separate low-skill workers from the ones who will get higher pay [in accordance with the “detail worker” separation discussed in Chapter 3]. Organized labor goes along with this, leading to Fordism. The result is that the new capitalist control of production beats out all competitors: when there are no other options to turn to, workers must acquiesce. However, the manipulation and control are essentially economic, existing in the broader economic system, not in the psychological controls of HR and so on. Workers remain hostile and cynical regarding their work.

An immediate observation is that Braverman is contradicting the sociological [!] argument that school, for instance, operates as a training ground for work (Braverman calls youth a "reserve" who have been held in "a prolonged period of adolescence" at the end of which they are "plunged into work from the outside" (96), in contrast to the earlier craft mode in which youths worked and learned family trades or were apprentices). The contrast that comes to mind is Foucault's "disciplinary archipelago" which he wrote about just a few years after this book, in which discipline in schools, work, the army, etc. come together to produce disciplined individuals. Several points of difference can be described here:

1) Braverman is talking particularly about the experience of the working class; Foucault discusses factories, etc. but his perspective and its reception could be more relevant to the middle classes, office work (which is more like school work), etc. If working class youth see their schooling as ridiculous or unconvincing, then the disciplinary archipelago is not instilling its values into them anyway: as in the "no future" generation of exactly this time period, or a little after.

2) There could also be some relevant difference here between US and European contexts in how different classes are schooled.

3) Foucault's approach is also individualistic – about how discipline shapes individual subjects, while Braverman is focused more on the class and on workers as groups – this was a critique made also by the HR school of the original industrial psychologists, which Braverman points out. Of course in Foucault discipline is not perfectly successful in disciplining "unruly bodies", and this inherent failure is part of its self-justification and continuing need for expansion.

4) Nevertheless the resistance to discipline in Foucault seems that of an individual, while Braverman is more interested in class consciousness. Thus the figure of workers being hostile and only apparently accepting of their role, essentially awaiting a historic moment in which to rebel, makes sense from his perspective, and is more desirable for his argument. There is a good question about a rapprochement between the perspectives, rendering a less individualized account than Foucault's in which resentment and class consciousness (latent or otherwise) has more of a role, while also treating discipline more seriously and less dismissively than Braverman does.